113. 'Don't think about building a wall. Think about laying one brick perfectly.'

In 2004 I enrolled in a workshop (two hours a week for eight weeks) on creative writing run by Judith White for the Auckland University Centre for Continuing Education.

There are many task-focused guidebooks on creative writing, complete with useful exercises for the novice writer. My interest, however, was in moving beyond theories and hints about ‘how to do it’ to focus on analysing ‘how it was done’. My purpose was to understand and illuminate, as explicitly as I was able, the process of creative writing as I experienced it over an eight week period.

Let me summarise what I discovered about the experience of creative writing in the course of my short apprenticeship. Here is part of what I wrote at that time.

Creative writing is by no means all creative experience. That 90:10 ratio of perspiration to inspiration seems to be the norm. But the 10% of inspiration is the drug that drives the whole caboodle, stimulating my desire to write and continue writing.

Creative writing is feast and famine. I have phases of obsessive activity in which everything else is crowded out by the work going on in my head. I live on the edge of my daily life, of the routines of eating and sleeping, of others’ conversations and concerns. At these times, I wake early – 3am or 4am – and scribble notes on pieces of paper and perhaps write for an hour or two. I begin to understand why creative folk have a reputation for being a nightmare to live with and am thankful for Sharon, a tolerant partner who sleeps well. I try to go with the flow, knowing these full moon risings won’t last, that the inspiration and energy will wane and be replaced by dead patches, calm resignation and aimless staring at Lake Pupuke. Eventually I know the wind will get up again and blow me in new directions.

There is a kind of creative ‘mucking about’ that seems to be part of the creative writing process. Doing nothing, going to movies and plays, watching television inertly, surfing the internet, moping about, walking round the rocks to Takapuna, watching the arctic terns assemble for their journey north, a scavenging seagull, a child exploring the waste basket, musing about the one-legged man with the three-legged dog, the long silences between Peter Hillary and his dad, broken by Ed saying “How would you like to go to the North Pole?” It all seems so random, yet is all grist to the mill. All potential material to channel into a story. One day. That mythical one day.

Stories have a life, style, rhythm of their own and take you to unexpected places. I’m never sure where I’m headed but am learning not to force the pace, to let a story, or a piece of dialogue, unravel in its own idiosyncratic manner. I’m not conscious of designing a style of writing that is integral to the story but, afterwards, can recognise a style is there, as with the carousel-like rhythm of the story-telling in Mr Oliphant’s Tears. [See blog 15, Mr Oliphant's Tears, 8 December 2011]

I love the intensity of the experience when writing, its immediacy and sense of total engagement. I feel as if I am permanently on the edge of a love affair, open and vulnerable to myself. ‘All the best art helps you understand some of your own questions’, says Naomi Watts, the star of 21 Grams*. ‘Like to write? of course, of course I do. I seem to live while I write – it is life, for me” - Elizabeth Barrett Browning.

I fill in the gaps in inspiration with the hard yards of revising and reworking and editing and find some useful writing habits to keep me persevering. I refuse to acknowledge writer’s block, learning that, if I have something to say, I will find words for it. Lousy words, perhaps, but words nevertheless. So I force them down… even if only jottings… dots on the screen… to be joined up later… with colour and frilly bits added… like stucco. I stop in the middle of a sentence so that I know where I am next time I visit the story. In the perspiration phase I take encouragement from these words from the actor Will Smith:


Don’t think about building a wall. Think about laying one brick perfectly. Just lay this one brick perfectly. Don’t let your mind wander to ‘Wow, when I’ve laid 14,000 of these bricks, it’s gonna be a great wall’. Just lay one perfect brick. In my mind I never look that far forward. I don’t hope that the movie is going to be incredible. I hope that this scene that we’re shooting today is going to be incredible. I try and make this scene the best that I can make it. And then in making this scene the best it can be, when they put them all together, hopefully they have something that is the best that it can be.**

I have a strange and disconcerting experience. I’m over in Bayview to see Harriet and James, her baby daughter, something I often do on Thursdays. On the way home I go into the Glenfield mall to look for a birthday present for Sharon. I wander around for a while, buy nothing, visit the toilet. Emerging from the cubicle in the gents I go to wash my hands. There is a long row of basins and mirrors. I wash my hands and look up to adjust my jacket. I am not there. No reflection. Just the basin in front of me, its mirror image and a view of cubicle doors beyond. I have disappeared.

There’s a simple explanation. In expecting what to see my mind has filled in some missing data. Sets of washbasins run back to back down the centre of the block facing the cubicles on each wall. Mine is the only set without a mirror so I’m looking straight through at the basin and cubicles on the other side. That I am not there is only a momentary perception but dislocating nevertheless. It sets me thinking about writers and mirrors, that the egotism of the writer needs the mirror of the publisher, not because writers have excessive narcissism but because they need to see their reflection to know that they exist. I remember that back in 1985, working at the East-West Centre in Hawaii and feeling much alone, I had visited the University of Hawaii library with the sole purpose of seeing whether or not they had a copy of a book I had written, a book about entrepreneurship and the founders and owners of small enterprises. They had. I did exist.

I also bring back from the mall two other perceptions about my developing psychology as a would-be fiction writer.

The first is the awareness that I can use the mirror experience in a story. I have no idea what story. Or when. But I am beginning to see, like some scavenging entrepreneur constantly on the lookout for new business opportunities, potential story pieces wherever I look. Everything is grist to the mill. When, as part of my 2002 photojournalism workshop, I go up to Karangahape Road with a camera borrowed from Wayne and walk into the old George Court building, it’s as though images are crying out at me to be shot. Within an hour I have used a thirty-six-exposure film – nothing by the standards of professional photographers, but a lot for a parsimonious Scotsman. And for weeks after the workshop I ‘see’ photographs wherever I go. If you are a hairdresser you notice people’s hair, if you work in a shoe shop, their shoes. Gradually my world is becoming a more dangerous place. What if that HSBC sign falls on my head, I wonder, or those kids’ bikes hanging precariously off the back of the four wheel drive on the motorway in front of me fall off in my path? My world is filling with ‘what ifs’.

My other recognition from the mirror in the mall is that dislocation is useful for a writer. A writer’s eye is for reversal of the expected, for the distorting image, as well as for the story or image that captures the essence of a particular person or place. I now recognise in my first tentative story lines the usefulness of inversion - the upside down clown hanging on my bedroom wall, the games I like to play switching between text and footnotes.*** Arthur Koestler writes that the creative act ‘does not create something out of nothing; it uncovers, selects, reshuffles, combines, synthesizes already existing facts, ideas, faculties, skills. The more familiar the parts, the more striking the new whole.’ Creative writing, to use Koestler’s terminology, is ‘bisociative’ not ‘associative’, by which he means that it doesn’t operate on a single plane with a given set of pedestrian rules but lives on several planes at once, rotating perception and cross-fertilizing to give new perspectives on the familiar.**** 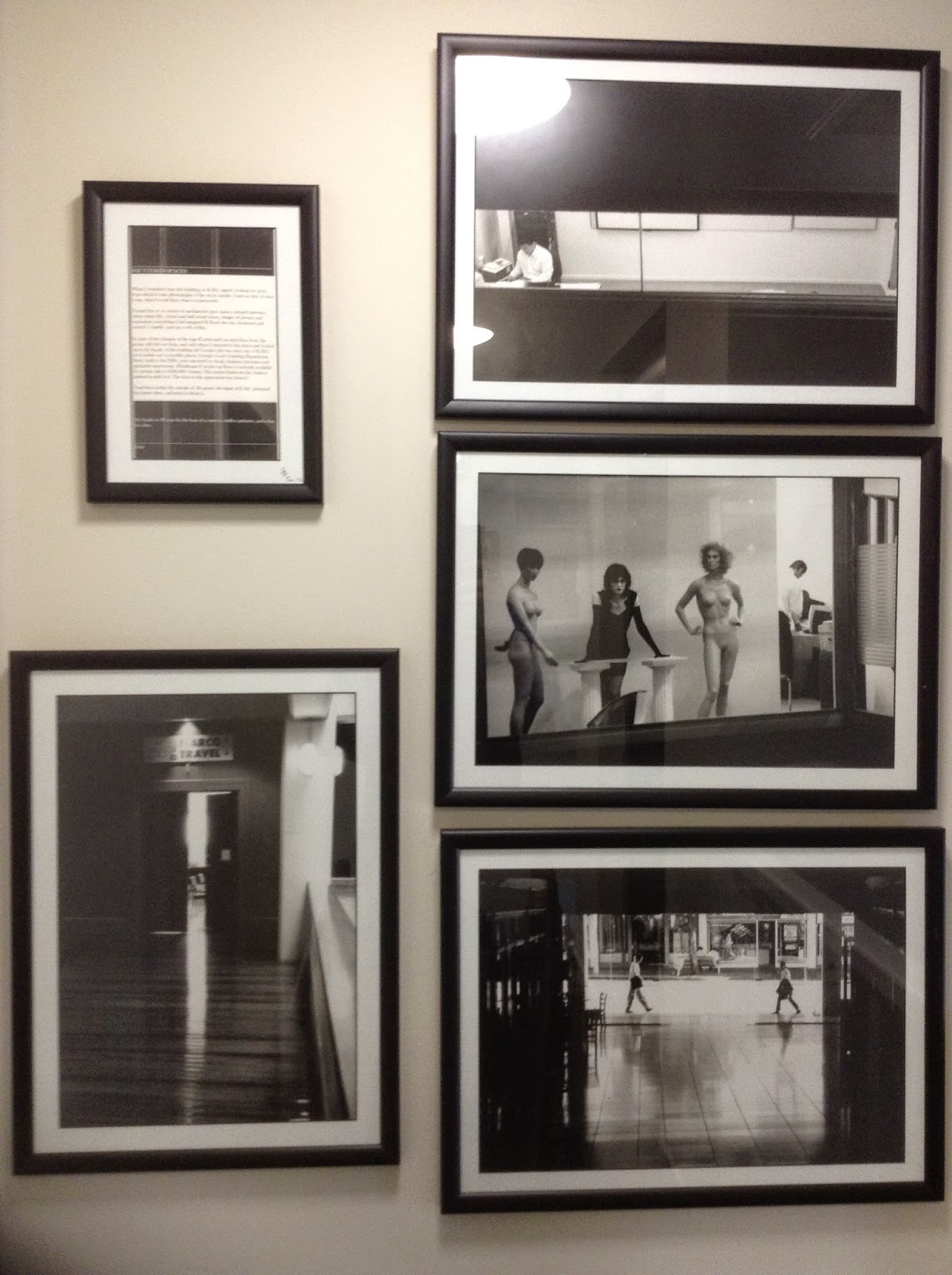 * In an interview reported in Canvas, 28/29 February 2004. Twenty-one grams is apparently the weight we all lose at the moment of our death thus provoking the speculation among the spiritually inclined that it is the weight of a person’s soul.

**** Ideas here pinched from a study of ‘Suits’ and ‘Creatives’ in the advertising industry, an unpublished paper on the commercialisation of creativity by Lucy Thomas.
Posted by breathless at 14:13