70. The Blue Monkeys of Akrotiri

﻿
The 2007 watercolour painting from which these monkeys are taken is titled Blue Monkey Dance Party and is one of two inspired by a visit in 1998 to the excavations at the prehistoric settlement of Akrotiri on the Mediterranean island of Thera (the classical name) - now better known officially as Thira or Santorini.
The ruins of Akrotiri that have been excavated include the Minoan city of c.1650 to 1500 BC though the site was continually inhabited from around 4500 BC. A massive volcanic eruption in the 17th century BC obliterated every trace of human activity on Thera for hundreds of years and created the astonishing volcanic cliff tops on which the Santorini towns of Fira and Oia now so dramatically sit.
The paintings found on the walls of Minoan houses excavated in Akrotiri are among the earliest examples of large-scale decorative art work in Europe. I was particularly taken with the lively energetic frescoes with blue monkeys in them.
There has been some speculation among historians of the ancient world as to the social and cultural significance of these monkeys. The monkeys were indigenous to Egypt and may have been taken to Thera as gifts or as pets. Alex III, in a Historum discussion forum, points out that some historians have placed these monkeys 'in a purely religious or cultural context, with the monkeys acting as a sort of mystical intermediary between the real world and the divine.' He traces the different strands of these arguments but concludes that, in his opinion 'art for the sake of art' is as good an explanation as any.

It was the art work that took my interest rather than any mystical baggage that might be associated with it. I particularly liked the idea of taking a drawing made by some unknown Minoan artist over three and a half thousand years ago and breathing new life into it. The Akrotiri fresco monkeys danced for me so I gave them a dance party to enjoy and then extended the idea by changing their colouring to red for a ragtime number. 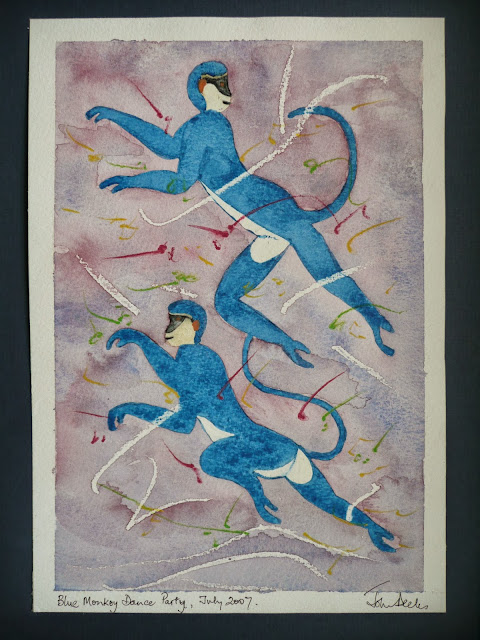 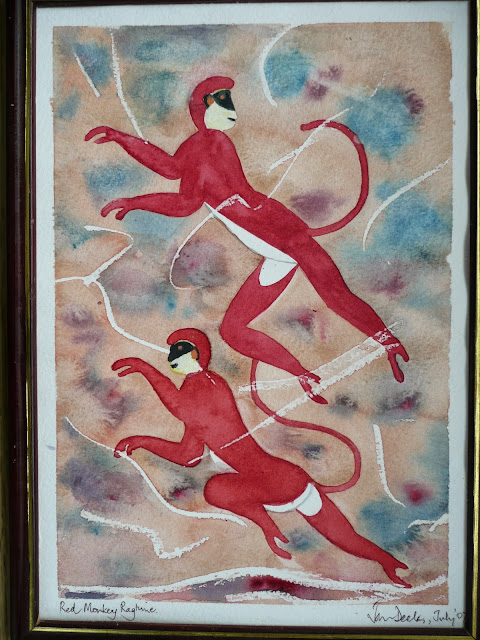 For the original artist to imagine that his (or her?) frescoed monkeys might resurface millennia later in a part of the world he/she would never have known existed would be like me imagining that, in some future millennium, my paintings would be excavated by visitors from an inconceivable planet.